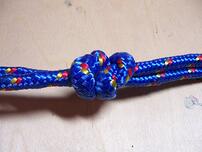 And if you're like me, you also get along quite well in a state of denial about getting AD*. Nevertheless, I will pack away in my brain, somewhere near where I keep such denial, the points she makes.

She is doing three things to help her when/if she gets the disease, apart from diet and exercise. Having watched her father's decline, she is rightfully sensitive to the possibility that she may have inherited a tendency to the disease. Although you don't have to have a relative with AD to get it. I'll talk about the first, because it's particularly relevant to knowledge workers.**

1. She is learning to do things with her hands, knitting and origami, because the hands remember even though the mind forgets. Her father, a bilingual college professor, loves to fill out forms (meaninglessly but happily), now that his mental higher faculties are gone.

If you're like me, you have let go of hands-on activities as the press of knowledge work has taken over. In my life I have worked with my hands as a handweaver, a knitter, a breadbaker, and a watercolorist, at varying degrees of proficiency (only two of them with any degree of skill).

Perhaps I'll try to pick up one or another of these again in a spare (?!) moment. Even though I'm sure I won't get Alzheimer's (see * above). What would you do?

** FYI: Here are the last two. 2. She is using her body actively in new ways in order to hold onto coordination and balance as long as she can: tai chi, yoga. 3. Becoming a better person. Her father's good heart shines through even though his mind has deteriorated.